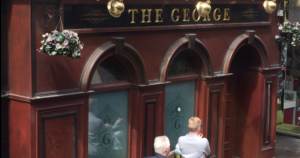 It’s the first such instance of vandalism at the iconic venue since the marriage referendum two years ago.

On Friday night, The George Nightclub on George’s Street was the victim of vandalism as an individual wrote homophobic and derogatory remarks on the outside of the iconic club.

The attack happened just days before the two year anniversary of the historic marriage referendum in Ireland.

But according to The Irish Times, the person responsible for writing the homophobic slurs was caught on three CCTV cameras, and the footage is being handed over to Gardaí who are investigating the incident.

It has since been reported that a man in his twenties has since been detained and taken to Pearse Street Garda Station where he’s been questioned in connection with criminal damage to the venue.

The graffiti was written in chalk on the outside of the bar on Geroge’s Street in Dublin City Centre and was swiftly cleaned away on Saturday morning.

Yesterday, in a statement on their Facebook page, The George said:

“Thanks for all the support and messages today. We are shocked and truly disheartened to see our building vandalised especially with the anniversary of the equality vote this weekend. But at times like these our community has come together in support like it always does. We won’t let this ruin us celebrating today’s anniversary ⚅⚄⚃⚂⚁⚀ #TheGeorge #togetherstronger.”

This incident is the first instant of vandalism at the bar since the the marriage referendum two years ago.

Hold on a sec…

On Episode 12 of Ireland’s first social chat show we have Alex Murphy and Chris Walley of The Young Offenders fame, music from Corkman Eoghan McElhinney and a chat with Irish sprinter Gina Akpe-Moses.

We’re tackling the world’s most sour sweets in Freaky Foods, Joe Gorman is masquerading as a famous DJ, and we look at the difference between pubs in the country and pubs in the Big Shmoke…